The 2018 Nobel Prize in Physiology or Medicine jointly to James P. Allison and Tasuku Honjo

The 2018 Nobel Prize in Physiology or Medicine jointly to James P. Allison and Tasuku Honjo for their discovery of cancer therapy by inhibition of negative immune regulation.

A new principle for immune therapy

During the 1990s, in his laboratory at the University of California, Berkeley, James P. Allison studied the T-cell protein CTLA-4. He was one of several scientists who had made the observation that CTLA-4 functions as a brake on T cells. Other research teams exploited the mechanism as a target in the treatment of autoimmune disease. Allison, however, had an entirely different idea. He had already developed an antibody that could bind to CTLA-4 and block its function (see Figure). He now set out to investigate if CTLA-4 blockade could disengage the T-cell brake and unleash the immune system to attack cancer cells. Allison and co-workers performed a first experiment at the end of 1994, and in their excitement it was immediately repeated over the Christmas break. The results were spectacular. Mice with cancer had been cured by treatment with the antibodies that inhibit the brake and unlock antitumor T-cell activity. Despite little interest from the pharmaceutical industry, Allison continued his intense efforts to develop the strategy into a therapy for humans. Promising results soon emerged from several groups, and in 2010 an important clinical study showed striking effects in patients with advanced melanoma, a type of skin cancer. In several patients signs of remaining cancer disappeared. Such remarkable results had never been seen before in this patient group. 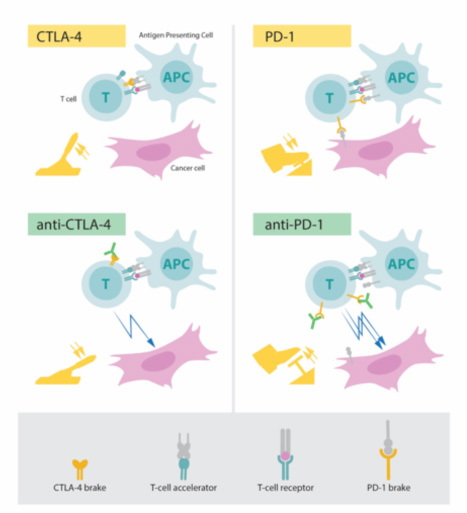 Discovery of PD-1 and its importance for cancer therapy

In 1992, a few years before Allison’s discovery, Tasuku Honjo discovered PD-1, another protein expressed on the surface of T-cells. Determined to unravel its role, he meticulously explored its function in a series of elegant experiments performed over many years in his laboratory at Kyoto University. The results showed that PD-1, similar to CTLA-4, functions as a T-cell brake, but operates by a different mechanism (see Figure). In animal experiments, PD-1 blockade was also shown to be a promising strategy in the fight against cancer, as demonstrated by Honjo and other groups. This paved the way for utilizing PD-1 as a target in the treatment of patients. Clinical development ensued, and in 2012 a key study demonstrated clear efficacy in the treatment of patients with different types of cancer. Results were dramatic, leading to long-term remission and possible cure in several patients with metastatic cancer, a condition that had previously been considered essentially untreatable.

Immune checkpoint therapy for cancer today and in the future

After the initial studies showing the effects of CTLA-4 and PD-1 blockade, the clinical development has been dramatic. We now know that the treatment, often referred to as “immune checkpoint therapy”, has fundamentally changed the outcome for certain groups of patients with advanced cancer. Similar to other cancer therapies, adverse side effects are seen, which can be serious and even life threatening. They are caused by an overactive immune response leading to autoimmune reactions, but are usually manageable. Intense continuing research is focused on elucidating mechanisms of action, with the aim of improving therapies and reducing side effects.

Of the two treatment strategies, checkpoint therapy against PD-1 has proven more effective and positive results are being observed in several types of cancer, including lung cancer, renal cancer, lymphoma and melanoma. New clinical studies indicate that combination therapy, targeting both CTLA-4 and PD-1, can be even more effective, as demonstrated in patients with melanoma. Thus, Allison and Honjo have inspired efforts to combine different strategies to release the brakes on the immune system with the aim of eliminating tumor cells even more efficiently. A large number of checkpoint therapy trials are currently underway against most types of cancer, and new checkpoint proteins are being tested as targets.

For more than 100 years scientists attempted to engage the immune system in the fight against cancer. Until the seminal discoveries by the two laureates, progress into clinical development was modest. Checkpoint therapy has now revolutionized cancer treatment and has fundamentally changed the way we view how cancer can be managed.

Getting the news that you have cancer is overwhelming and frightening. The COVID-19 crisis adds another layer of anxiety. But know this: you can protect yourself from COVID-19 without compromising your cancer treatment.

The PDC was developed to advance understanding of how proteins help to shape the risk, diagnosis, development, progression, and treatment of cancer.